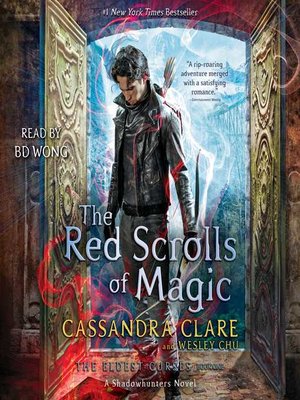 The Red Scrolls of Magic

From #1 New York Times bestseller Cassandra Clare and award-winner Wesley Chu comes the first book in a new series full of "swoon-worthy romance [and] abundant action" (Publishers Weekly). The Red Scrolls of Magic is a Shadowhunters novel.
All Magnus Bane wanted was a vacation—a lavish trip across Europe with Alec Lightwood, the Shadowhunter who against all odds is finally his boyfriend. But as soon as the pair settles in Paris, an old friend arrives with news about a demon-worshipping cult called the Crimson Hand that is bent on causing chaos around the world. A cult that was apparently founded by Magnus himself. Years ago. As a joke.

Cassandra Clare is the #1 New York Times and USA TODAY bestselling author of Chain of Gold as well as the internationally bestselling Dark Artifices trilogy, Mortal Instruments series, and Infernal Devices trilogy. She is the coauthor of the Eldes...

More about Cassandra Clare
The Red Scrolls of Magic
Copy and paste the code into your website.
New here? Learn how to read digital books for free