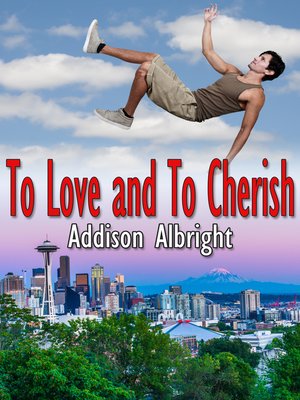 To Love and to Cherish

FictionLiteratureRomance
Companion to Til Death Do Us Part
Jilted by his fiancé two weeks before their wedding, Nash Marino's outlook on life in general, and love in particular, is jaded. After months of couch-surfing, Nash is fed up. He's sick and tired of his living conditions, worn out by the demands of his nursing job, and despairs of ever finding love again. In fact, he doesn't think he's capable of true love. Monogamy, commitment, companionship, and regular sex ... that's all he wants, and the sooner, the better.
When Nash crosses paths with a like-minded man who's also in need of a live-in nurse for a beloved relative, Nash figures all his problems are solved. But matters are complicated by a freak accident and amnesia. When Nash's marriage of convenience scheme is muddied by notions of love after his memory reboot, will their plans go awry, or will Nash's new outlook on life be just what the doctor ordered?
FictionLiteratureRomance

Addison Albright lives in the middle of the USA with three peculiar cats. Addison loves spending time with her family, reading, popcorn, walking, "open window weather," cats, math, and anything chocolate. She loves to read pretty much anything and...

More about Addison Albright
To Love and to Cherish
Copy and paste the code into your website.
New here? Learn how to read digital books for free