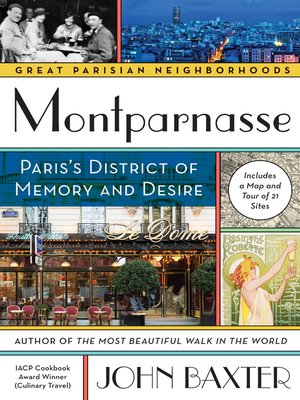 In the third portrait of his series Great Parisian Neighborhoods, award-winning raconteur John Baxter takes readers on a dazzling excursion of Montparnasse.

By the IACP Award-winning author of the national bestseller The Most Beautiful Walk in the World, MONTPARNASSE reveals the history and present delights of the iconic neighborhood that is best associated with the vibrant 1920-30s-era Paris—a romantic time and place evoked in Hemingway's memoir A Moveable Feast and Henry Miller's Tropic of Cancer. From the first meeting of Hemingway and F. Scott Fitzgerald to their friendship's bitter conclusion; from the courage of the anti-Nazi resistance to the clubs where German generals partied; from the attempted murder of Samuel Beckett to the rise of Josephine Baker to stardom; from the high life of the Coupole and the Cafe du Dôme to the bawdy music halls of rue de la Gaité; no Paris quarter has witnessed more tumultuous events than Montparnasse.

In a ground-breaking reappraisal of this most glamorous of Paris's districts, Baxter looks beyond the nostalgia to the secret history of Montparnasse, a district where desire effaced memory and every taste could be satisfied—even those which were unexpressed. If, as Oscar Wilde suggested, all good Americans went to Paris when they died, it was Montparnasse that brought them back to life.

John Baxter has lived in Paris for more than twenty years. He is the author of four acclaimed memoirs about his life in France: The Perfect Meal: In Search of the Lost Tastes of France; The Most Beautiful Walk in the World: A Pedestrian in Paris; ...

More about John Baxter
Montparnasse
Copy and paste the code into your website.
New here? Learn how to read digital books for free