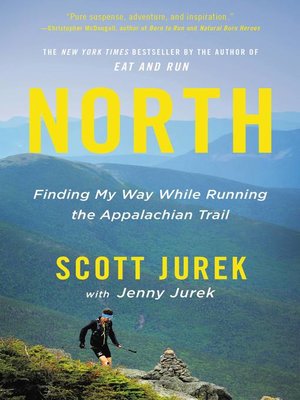 Finding My Way While Running the Appalachian Trail

Biography & AutobiographySports & RecreationsTravelNonfiction
From the author of the bestseller Eat and Run, a thrilling new memoir about his grueling, exhilarating, and immensely inspiring 46-day run to break the speed record for the Appalachian Trail.
Scott Jurek is one of the world's best known and most beloved ultrarunners. Renowned for his remarkable endurance and speed, accomplished on a vegan diet, he's finished first in nearly all of ultrarunning's elite events over the course of his career. But after two decades of racing, training, speaking, and touring, Jurek felt an urgent need to discover something new about himself. He embarked on a wholly unique challenge, one that would force him to grow as a person and as an athlete: breaking the speed record for the Appalachian Trail. North is the story of the 2,189-mile journey that nearly shattered him.
When he set out in the spring of 2015, Jurek anticipated punishing terrain, forbidding weather, and inevitable injuries. He would have to run nearly 50 miles a day, every day, for almost seven weeks. He knew he would be pushing himself to the limit, that comfort and rest would be in short supply — but he couldn't have imagined the physical and emotional toll the trip would exact, nor the rewards it would offer.
With his wife, Jenny, friends, and the kindness of strangers supporting him, Jurek ran, hiked, and stumbled his way north, one white mile at a time. A stunning narrative of perseverance and personal transformation, North is a portrait of a man stripped bare on the most demanding and transcendent effort of his life. It will inspire runners and non-runners alike to keep striving for their personal best.
Biography & AutobiographySports & RecreationsTravelNonfiction

Scott Jurek, one of the greatest runners of all time, has claimed multiple victories in the historic 153-mile Spartathlon, the Hardrock Hundred, the Badwater 135-Mile Ultramarathon, and the Western States 100-Mile Endurance Run, which he won a rec...

More about Scott Jurek
North
Copy and paste the code into your website.
New here? Learn how to read digital books for free