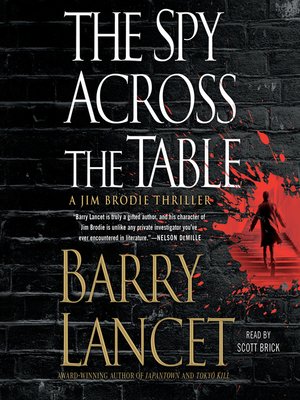 The Spy Across the Table

FictionMysteryThriller
In this fast-paced fourth thriller featuring Japanese antiquities expert Jim Brodie, a double-murder at the Kennedy Center forces the PI into a dangerous game of espionage—putting him in the crosshairs of the Chinese, North Korean, and American governments.
Jim Brodie is an antiques dealer, Japan expert, and second-generation private investigator. When two of his friends are murdered backstage at a Kennedy Center performance in Washington, DC, he's devastated—and determined to hunt down the killer. He's not the only one.

After the attack, Brodie is summoned to the White House. The First Lady was the college roommate of one of the victims, and she enlists Brodie—off the books—to use his Japanese connections to track down the assassin. Homeland Security head Tom Swelley is furious that the White House is meddling and wants Brodie off the case. Why? For the same reason a master Chinese spy known only as Zhou, one of the most dangerous men alive, appears on the scene: Those murders were no random act of violence.

Brodie flies to Tokyo to attend the second of two funerals, when his friend's daughter Anna is kidnapped during the ceremony. It is then Brodie realizes that the murders were simply bait to draw her out of hiding. Anna, it seems, is the key architect of a top-secret NSA program that gathers the personal secrets of America's most influential leaders. Secrets so damaging that North Korea and China will stop at nothing to get them.

"As usual in a Barry Lancet novel, the action scenes are first-rate...and the knowledge he imparts about Asian politics and culture is deep. A solid, consistently smart thriller" (Kirkus Reviews), The Spy Across the Table takes us on a wild ride around the world and keeps us on the edge of our seats until the very end.
FictionMysteryThriller

Barry Lancet is a Barry Award­–winning author and finalist for the Shamus Award. He has lived in Japan for more than twenty-five years. His former position as an editor at one of the nation's largest publishers gave him access to the inner circles...

More about Barry Lancet
The Spy Across the Table
Copy and paste the code into your website.
New here? Learn how to read digital books for free