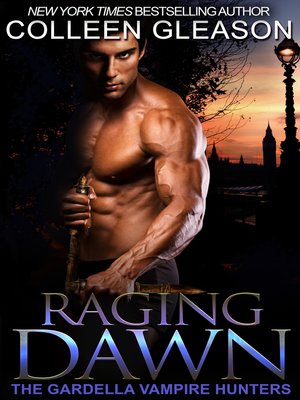 England, 1922 When the vampires Max Denton hunts brutally murder his wife, he is nearly destroyed himself. He spends his life in solitude, violence, and revenge. But when sensitive information about his young daughter falls into the hands of the vampires, Max is forced to team up with the woman whose father ultimately caused the death of his wife.Savina Eleaisa has secrets of her own, and she's determined to do whatever it takes to clear her father's name: even if it involves seducing the most dangerous of vampires—with or without the help of the arrogant, brooding Max Denton.A short, stand-alone novel in the Gardella Vampire Hunters series set at a Downton Abbey type English estate.

Colleen Gleason is the NEW YORK TIMES and USA Today bestselling author of the Gardella Vampire Chronicles. She has more than twenty books in print and has written for New American Library, MIRA Books, Chronicle Books, and HarperCollins (as Joss Wa...

More about Colleen Gleason
Raging Dawn
Copy and paste the code into your website.
New here? Learn how to read digital books for free