By U.S. Department of Defense 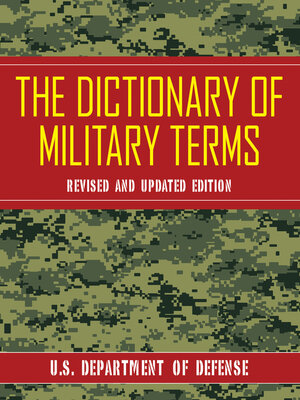 View more libraries...
The official and comprehensive dictionary of military and associated terminology compiled and used by the Department of Defense.
Divided into two sections, The Dictionary of Military Terms contains the terms and definitions approved for Department of Defense (DOD) and the North Atlantic Treaty Organization (NATO) use as well as a complete listing of commonly used abbreviations and acronyms. These military and associated terms, together with their definitions, constitute approved terminology for general use by all DOD components.
The Dictionary of Military Terms supplements standard English-language dictionaries and standardizes military and associated terminology to improve communication and mutual understanding within the DOD, with other federal agencies, and among the United States and its allies. It is the primary terminology source when preparing correspondence, including policy, strategy, doctrine, and planning documents. This publication applies to the Office of the Secretary of Defense, the Services, the Joint Staff, combatant commands, DOD agencies, and all other DOD components.