The Mystery of the Ming Connection, Expanded Edition 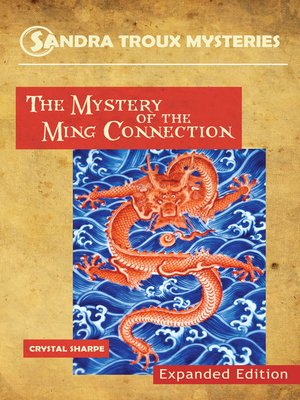 Fans of Nancy Drew, lifelong friends Sandy Troux, Bobbi Power and Lizbet Sheridan, return to their hometown of Prairieview after widowhood, divorce, and retirement. "Now what?" they ask. In answer to this growing question facing Baby Boomers everywhere, they plunge into a thrilling new life of sleuthing that takes them places they have never been and up against villains and crimes of the worst sort.

In their first adventure, The Mystery of the Ming Connection, the three friends encounter a series of museum thefts of precious Ming Dynasty artifacts, which brings them from New York City to Seoul, and on to Beijing and Xian in China. This light-hearted, riveting page turner nevertheless focuses on two serious themes: international art theft and sex trafficking.

The story unfolds with the theft of a priceless Ming Dynasty jar from the New York Metropolitan Museum of Art. Sandy, Bobbi and Lizbet, are quickly engaged in pursuing the elusive Gold Scarf Man, the probable art thief, across Korea and China. Two additional thefts of Ming porcelains from museums in Seoul and Beijing threaten to set off an international incident – overshadowed only by a series of scurrilous kidnappings of local and foreign young women. The horror of human trafficking is brought close to home when Bobbi's college-student daughter Sophie Rose, adopted from China, is kidnapped from right under their noses.

At the site of each theft and kidnapping, a curious coin is left behind. The coin is engraved with Chinese characters for Taina Ziping and a right-facing swastika, the hideous symbol of the Nazis. Two of the words on the coin hark back to the Taiping Rebellion of 1800s China. But what do the other two words mean? And why is the Nazi symbol engraved on it as well? Is the coin left as a clue, an arrogant calling card, or a threat? And what do the Taiping Rebellion, the Nazi swastika, the desire for a valuable gold and diamond bracelet, museum art thefts, and kidnapping all have to do with each other?

In a series of thrilling chases and adventures – by horseback on the Great Wall, through the streets of Beijing in a blinding blizzard, and underground in a secret Xian tunnel system filled with cells of trafficked girls, Sandy and her sister sleuths pursue the heinous criminals to unravel the mystery. The book's climatic chapter brings the super shero trio face to face with the surprising and heart-stopping solution to The Mystery of the Ming Connection.

This fast-paced tale is full of suspense and danger tempered with wit, humor and a hint of romance – set within an accurate historic and cultural backdrop of South Korea and China.

Ever the "Why Not?" generation, Baby Boomers everywhere will respond to Sandy, Bobbi and Lizbet's inspiring message of self-reinvention, bravery in the face of the unknown and the power of friendship. In a time of cynicism and fear of the future, women of all ages (and men, as well!) will be strengthened by a trio of sheroes who fight for right in a world seemingly gone wrong.