Hey, That Kid Got Issues Maybe It's AdHd 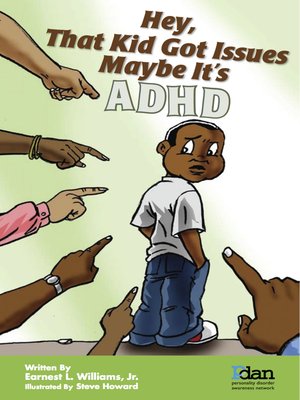 This children's book about one family's experience with ADHD helps kids, their parents, teachers and others understand why they can't sit still, talk too much, have difficulty following directions and paying attention. The book includes "Parent's Corner", an ADHD resource section.

Justin was interrupting his class. At first, typical teacher punishment was rendered with no consequences deterring Justin's happy-go-lucky attitude. Quickly, he was known throughout the school, labeled and ridiculed by students. The letter finally arrived requesting a parent-teacher conference. "I took off work and spent the day in Justin's classroom," said Mr. Williams. "My concern for Justin overrode my amazement at Justin's behavior during the school day. I was equally devastated when the teacher recommended to have my son tested for ADHD," Mr. Williams said.

Mr. Williams sought to find help for Justin as possible. He had to educate himself about ADHD after test results confirmed his son's disorder. "Come to find out thousands of boys and girls sit in classrooms across the nation with the same thing Justin has," said Mr. Williams. Most often the boys are more frequently diagnosed due to their overt activity. Your kids will enjoy this book and gain some relief from their behaviors.