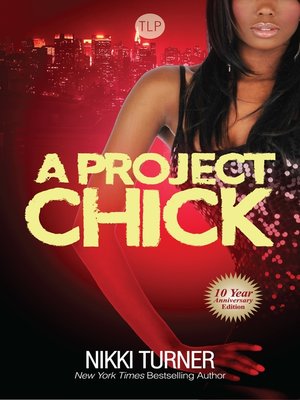 In the 10th anniversary of A Project Chick's original release, Nikki Turner, the New York Times Bestselling author, will take readers back to where it all began. This is A Project Chick exactly as it was written and edited 10 years ago, just as authentic and original but in digital form for the very first time.

Tressa is a fly girl accustomed to the lavish lifestyle that her possessive and deranged baby daddy, Lucky, has provided for her. In order to keep up her high standards of living, time and again she tolerates his unforgivable actions. It's not until he pulls off the ultimate stunt that she realizes no mink coat, car, house or any amount of money is worth sacrificing her peace of mind.

Without a second thought, Tressa leaves everything behind - with the exception of her street savvy. She sets out to make a life of her own, one filled with hard times and even harder luck.

Tressa soon finds herself making the transition from public figure to public assistance. Every day of her life seems like one drama-filled chapter after another. From the baby daddy drama, the backstabbing friends, to the various unforgettable men she sorts through and disposes of.

In this captivating tale, Tressa's voyage will expose readers to the brutally honest life of a struggling single mother that has yet to be documented.