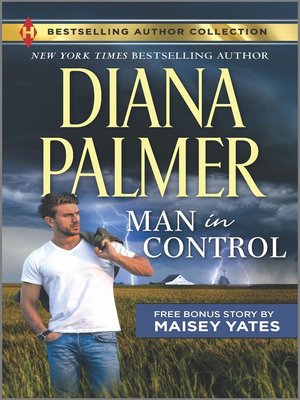 Man in Control & Take Me, Cowboy

FictionRomanceSuspenseWestern
AN UNDERCOVER AFFAIR...
Ever since DEA agent Alexander Cobb gave Jodie Clayburn a Texas-size brush-off, they've been sworn enemies. When he pushed Jodie out of his life, he told himself he was doing the right thing. But eight years later, this cynical Texan can't believe the baby-faced schoolgirl has turned into such a beauty. Or that he'd have to beg her to help him crack a drug-smuggling case that threatens Jacobsville.
Tantalized to the core, Alexander would risk everything to protect her. In a hot pursuit, the two are drawn closer together. Will the man in control finally get caught in his own web of danger...and desire?
"Palmer knows how to make the sparks fly!"—Publishers Weekly
FREE BONUS STORY INCLUDED IN THIS VOLUME!
Take Me, Cowboy by New York Times bestselling author Maisey Yates
Rancher Chase McCormack is Anna Brown's best friend. To him she's just one of the boys, but she's determined to convince him she can be so much more...
Previously published.
FictionRomanceSuspenseWestern

New York Times Bestselling author Maisey Yates lives in rural Oregon with her three children and her husband, whose chiseled jaw and arresting features continue to make her swoon. She feels the epic trek she takes several times a day from her offi...

More about Diana Palmer
Man in Control & Take Me, Cowboy
Copy and paste the code into your website.
New here? Learn how to read digital books for free