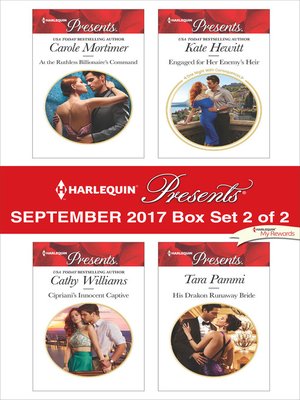 View more libraries...
Harlequin® Presents brings you a collection of four new titles! This Presents box set includes:
AT THE RUTHLESS BILLIONAIRE'S COMMANDby Carole Mortimer
Gregorio de la Cruz can't forget fiery Lia. He won't rest until he has her in his bed! Lia won't accept Gregorio's outrageous demands: she cannot trust him. But soon Lia can't resist the sensual onslaught of this billionaire's seduction!
CIPRIANI'S INNOCENT CAPTIVEby Cathy Williams
One of Lucas Cipriani's employees has information that could ruin a takeover! The only solution is to keep Katy Brennan captive on his yacht... Katy is furious, but unwillingly intrigued. Soon she's shockingly tempted to relinquish her innocence!
ENGAGED FOR HER ENEMY'S HEIR One Night With Consequencesby Kate Hewitt
Ruthless Rafael Vitali is livid when he discovers that the woman in his bed is the daughter of his enemy. But Allegra's pregnancy gives Rafael the opportunity to seize control. He insists she move to Sicily...as his wife!
HIS DRAKON RUNAWAY BRIDEThe Drakon Royalsby Tara Pammi
For ten years Ariana has hidden from Crown Prince Andreas—until he finds her and announces that they're still married! He's determined to claim Ariana for his royal bed. But dark-hearted Andreas quickly realizes desire is even more binding than duty...
Be sure to collect Harlequin® Presents' September2017 Box Set 1 of 2!