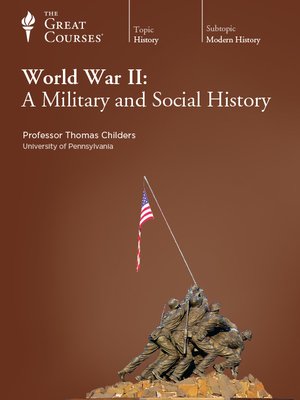 A Military and Social History

Between 1937 and 1945, approximately 55 million people perished in the series of interrelated conflicts known as the Second World War. No continent was left untouched, no ocean unaffected. The war led to the eclipse of Europe and the emergence of the United States and the Soviet Union as global superpowers; ushered in the atomic age; produced, in the Holocaust, the most horrific crime ever committed in the history of Western civilization, and led to the end of Europe's colonial empires around the world. But though World War II defined an entire epoch in human history, pressing questions remain - about whether Hitler could have been stopped earlier, about Pearl Harbor, about saving more people from the Holocaust, about using the atomic bomb, and even about how close the Allies came to actually losing. This engaging series of 30 lectures is rich in detail and near-cinematic portraits of leaders and events. It explores not only the origins of the war, including the impact of the Treaty of Versailles, but also how it unfolded on both battlefront and the American home front, with focused looks at key subjects like Nazism and the Holocaust and the philosophy of strategic bombing and its impact on the future nature of warfare.

Dr. Thomas Childers is Sheldon and Lucy Hackney Professor of History at the University of Pennsylvania, where he has been teaching for over 25 years. He earned his bachelor's and master's degrees from the University of Tennessee and his Ph.D. in H...

More about Thomas Childers
World War II
Copy and paste the code into your website.
New here? Learn how to read digital books for free