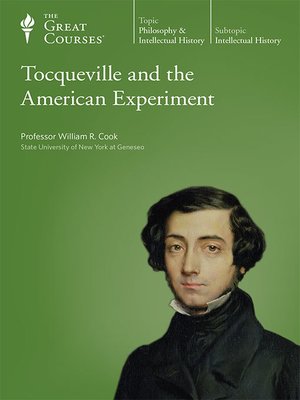 Tocqueville and the American Experiment

Participate in a spirited exploration of Alexis de Tocqueville and his unique observations of this young nation that resulted in the two volumes of Democracy in America. How is it possible that perhaps the greatest book about U.S. democracy ever written was penned by a Frenchman visiting this country 175 years ago? Why is it still relevant in today's ever-changing political landscape? Tocqueville, a 25-year-old French nobleman who journeyed here in 1831, wanted to observe firsthand the successful political experiment that was evolving in the United States and take his findings home to France, which was itself trying to shape its own young democracy. The remarkable book that resulted has been called both the best book ever written about democracy and the best book ever written about America. Published in two parts, one in 1835 and the second in 1840, it reveals, in its 700 pages, insights about democracy and the American character that have led both liberals and conservatives to claim Tocqueville as their own, often by citing the very same passages, and often out of context. Over the course of 24 spirited lectures, Professor Cook leads you on an engaging and energetic discussion on Tocqueville, his journey, his writing of Democracy in America and, most of all, his thoughts on the young nation he was observing. You'll learn what Tocqueville had to say about the meaning of family in a democracy, race and the damage done by slavery, the crucial role of women, religion as a moral guide, the dangers of turning religion to political ends, and more. Today, Tocqueville can be both a guide and a reminder of the cultural context in which democratic institutions can develop and flourish.

More about William R. Cook
Tocqueville and the American Experiment
Copy and paste the code into your website.
New here? Learn how to read digital books for free