The Rise and Fall of Soviet Communism 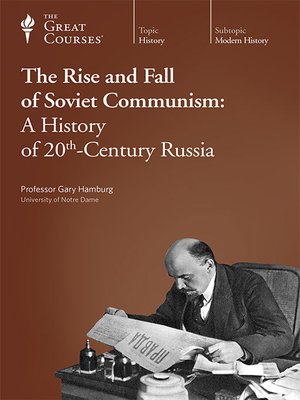 From the Oval Office to the streets of Moscow, world leaders and ordinary citizens alike share interest and concerns about Russia. Can democracy survive there? What does the future hold for the once expansive and still powerful Russian nation? Is Soviet Communism truly dead?These are the kinds of questions diplomats struggle with every day. And now, through this series of 16 incisive lectures by an acclaimed scholar of Russian history, you can begin investigating them for yourself as you take a probing historical journey through the recent history and near future of a key world power. Whether your chief interest is Russian or world history, political theory, or international relations, you'll take away fresh knowledge and insight as Professor Hamburg examines the improbable origins of Communist rule in Russia, the ascent of the Red Star to its zenith, and its decline and apparent end in the wake of 1989's events.Using new material from previously sealed Soviet archives and covering recent controversial findings by both Russian and Western scholars, he begins with the failures of the czarist regime and the horrors of the First World War, then takes you through the bloody era of Josef Stalin's purges and beyond to Mikhail Gorbachev's perestroika to offer you a thoroughgoing analysis of the Soviet experiment.