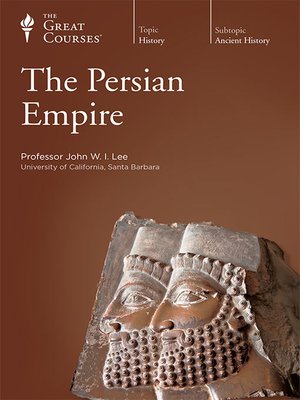 For the past 2,500 years, we've heard about the Persian Empire as a decadent civilization run by despots, the villains who lost the Battle of Marathon and supplied the fodder for bad guys in literature and film. But it turns out this image is inaccurate. As recent scholarship shows, the Persian Empire was arguably the world's first global power- a diverse, multicultural empire with flourishing businesses and people on the move. The key is to look at the Persian Empire from the Persian's perspective. Over the span of 24 fascinating lectures, you'll take on the role of a history detective to discover the truth about this grand civilization. You'll discover the key to the empire's success lay in its greatest rulers, each of whom played a critical role in shaping and strengthening a civilization we still remember today. But while the great kings were administering justice or waging wars, everyday Persians were just as important to the success of the empire. You'll also learn about the empire's efficient communications network; the Persian economy and the workers and entrepreneurs who supported it; the role of women in the empire, especially the influence of royal women; and the daily cultural exchanges between the diverse peoples of the empire. Professor Lee shows you a whole new history of the ancient world - a perspective largely unknown even by students of history. These lectures capture the people, the strength, the rise and the downfall of this great empire, revealing the complexity behind centuries of a previously one-sided history. Take this opportunity to complete your understanding of the ancient world and discover the humanity of the ancient Persians.

More about John W. I. Lee
The Persian Empire
Copy and paste the code into your website.
New here? Learn how to read digital books for free