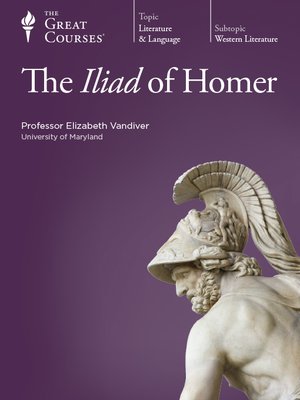 The Iliad of Homer

For thousands of years, Homer's ancient epic poem the Iliad has enchanted readers from around the world. When you join Professor Vandiver for this lecture series on the Iliad , you'll come to understand what has enthralled and gripped so many people. Her compelling 12-lecture look at this literary masterpiece - whether it's the work of many authors or the "vision" of a single blind poet - makes it vividly clear why, after almost 3,000 years, the Iliad remains not only among the greatest adventure stories ever told but also one of the most compelling meditations on the human condition ever written. As you'll learn, the grandeur and immediacy of Homer's world would seem to defy time and space. Throughout these lectures, you'll explore this legendary era in brilliant, unforgettable hues. You'll meet its towering heroes who thirst for honor and the gods who inspired and instigated them. You'll go deep inside the shattering battles at Troy that act out mankind's awesome passions for glory, love, and vengeance. But more than that, you'll focus on the timeless human issues this masterpiece raises, all of them evoked by the power of a single dramatic question: Why does Achilles rage? The limits of freedom, the common humanity we share, the line between justice and revenge, the nature of destiny, the meaning of life - Professor Vandiver uses the Iliad as a potent lens through which to study them all.

Dr. Elizabeth Vandiver is Associate Professor of Classics and Clement Biddle Penrose Professor of Latin at Whitman College in Walla Walla, Washington. She was formerly Director of the Honors Humanities program at the University of Maryland at Coll...

More about Elizabeth Vandiver
The Iliad of Homer
Copy and paste the code into your website.
New here? Learn how to read digital books for free