The Fall and Rise of China 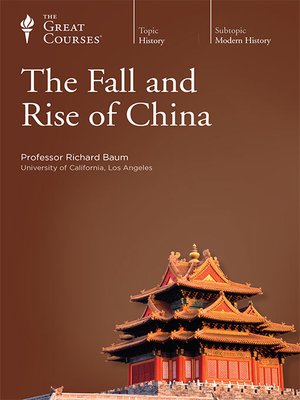 How can we account for China's momentous - and almost wholly unanticipated - global rise? And what does it mean, for us in the West and for humanity's future? Speaking to these vital and fascinating questions, these 48 penetrating lectures by Professor Baum bring to vivid life the human struggles, the titanic political upheavals, and the spectacular speed of China's modern rebirth. Offering multilevel insight into one of the most astounding real-life dramas of modern history, the lectures weave together the richly diverse developments and sociopolitical currents that created the China you now read about in the headlines. You'll get a detailed understanding of all the core events in China's century of stunning change, including the collapse of the Qing dynasty, the Republican era and civil wars, the "Great Leap Forward", the Cultural Revolution, and the post-Mao economic "miracle". Throughout, Professor Baum reveals highly unusual details that enrich the cinematic sweep of the story. For example, you'll learn about the Christian warlord who baptized his troops with a fire hose, the strange kidnapping of Chiang K'ai-shek, and Professor Baum's own smuggling of top-secret documents out of Taiwan. A core strength of these lectures is that they make sense of the dramatic events of the story by getting deeply at what underlay them, culturally, socially, and historically - leaving you with a nuanced knowledge of the forces moving China's modern emergence. Bringing alive the passionate reinvention of China with deep discernment and humanity, they portray the confounding, majestic, heart-rending, and visionary story of a modern giant.