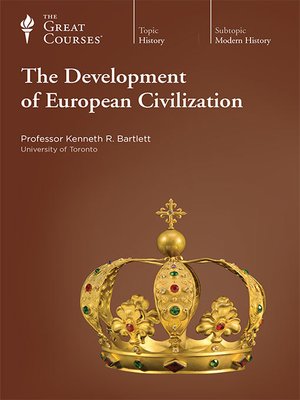 The Development of European Civilization

In almost every way that matters, historical Europe was the laboratory in which the world you now live in was conceived and tested. And you'll be living with the consequences for the rest of your life. These 48 lectures lead you through the doors of that laboratory and guide you through the development of Europe from the late Middle Ages through the eve of World War II. As you follow Professor Bartlett through the dramatic story of European history, you'll learn about the major ideologies and "isms" that bubbled forth from Europe's constantly fermenting cauldron of debate and conflict, including absolutism, scientism, rationalism, capitalism, nationalism, liberalism, and totalitarianism. You'll investigate the forces that intermingled to create the Industrial Revolution and the accompanying economic and social upheavals that would, in turn, create so many more. You'll also make sense of the European ideologies of government, including the rule of law, the concept of "the consent of the governed," taxation, an independent judiciary, and other concepts. You'll explore the new roles for religion in European life, from the end of the traditional union of altar and throne to great upheavals such as the Protestant Reformation and the Great Schism. And you'll witness the evolution of the European class system, which influenced the social forces that swirled around it just as much as it was influenced by them. Rather than offering a laundry list of dates, events, and famous individuals, Professor Bartlett leaves you instead with an understanding of historical and social causality. More important: He offers you the chance to experience Europe's development from a European perspective.

Dr. Kenneth R. Bartlett is Professor of History and Renaissance Studies at the University of Toronto, where he earned his Ph.D. and has taught for the past 30 years.A distinguished teacher, Professor Bartlett has received numerous teaching awards ...

More about Kenneth Bartlett
The Development of European Civilization
Copy and paste the code into your website.
New here? Learn how to read digital books for free