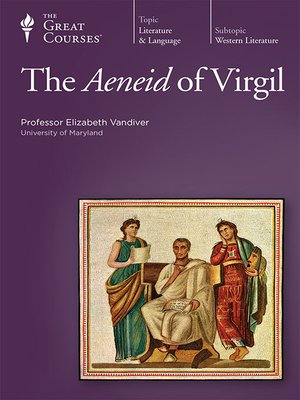 The Aeneid of Virgil

The Aeneid is the great national epic of ancient Rome, and one of the most important works of literature ever written. And with Professor Vandiver's twelve instructive lectures, you'll enter fully into the gripping tale that Virgil tells. Join Aeneas on his long journey west from ruined Troy to the founding of a new nation in Italy, and see how he weaves a rich network of compelling human themes. Your encounter with the Aeneid focuses on careful, detailed examinations of the epic's background, main themes, and significant episodes. You'll get a helpful introduction to Virgil's Latin epic and the mythic and literary background with which Virgil was working (including an insightful summary of the legends of the Trojan War and of Romulus and Remus). From there, you'll dive into the poem itself with lectures that, in their clarity, economy, and enthusiasm, you're sure to find illuminating and thoroughly engaging. Throughout it all, the figure of Aeneas is never far from center stage- as fighter and lover, father and son, refugee and ruler, wanderer and founder, spellbinding storyteller, and sword-wielding man of action. Whether you read the narrative of his adventures as a paean to the glories of Rome or a cautionary tale about the human costs of empire, by the end of these lectures you'll come to understand precisely why Tennyson called Virgil a lord of language, and lauded his special gift for golden phrase.

Dr. Elizabeth Vandiver is Associate Professor of Classics and Clement Biddle Penrose Professor of Latin at Whitman College in Walla Walla, Washington. She was formerly Director of the Honors Humanities program at the University of Maryland at Coll...

More about Elizabeth Vandiver
The Aeneid of Virgil
Copy and paste the code into your website.
New here? Learn how to read digital books for free