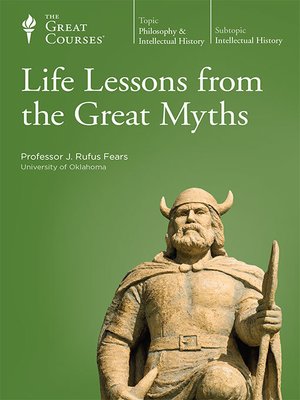 Life Lessons from the Great Myths

Change the way you think about some of the greatest stories ever told with this examination of the most important myths from more than 3,000 years of history. The ways in which the human imagination can transform historical events, people, and themes into powerful myths that endure through the ages is nothing short of awe-inspiring. To examine the core of the world's greatest myths and tales is to confront some of history's most basic human truths. These 36 captivating lectures comprise a powerful work of storytelling prowess and historical insight, exploring events and individuals that so gripped civilizations, they transcended to the level of myth and played an important role in shaping culture, politics, religion, and more. Looking at myths from ancient Greece and Rome, from the Near East and the Middle East, from early and modern Europe, and from the United States, Professor Fears shows how myths convey higher truths too profound to be described in ordinary language. Decoding them, Professor Fears reveals how they serve as enduring sources of wisdom. For example, the rich tapestry of supernatural events in the Epic of Gilgamesh provided support for Mesopotamian politics, including the need for a divinely appointed kingship. The furious battles in Beowulf played an important role in cementing Germanic ideas of courage, heroism, glory, and honor. And the dramatic last stand at the Battle of the Alamo emphasized for Americans that liberty is worth any price. The search for wisdom is one of life's great purposes, and there is much wisdom to be gleaned from the world's great myths. By the final powerful and stirring lecture of this course, you're sure to find yourself wiser than you were before you started.

Dr. J. Rufus Fears was David Ross Boyd Professor of Classics at the University of Oklahoma, where he held the G. T. and Libby Blankenship Chair in the History of Liberty. He also served as David and Ann Brown Distinguished Fellow of the Oklahoma C...

More about Rufus Fears
Life Lessons from the Great Myths
Copy and paste the code into your website.
New here? Learn how to read digital books for free