From Yao to Mao 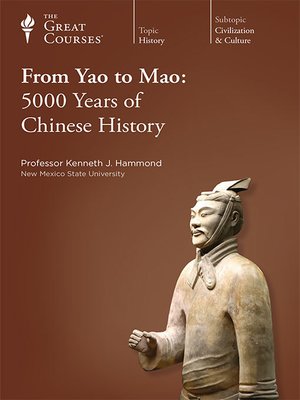 For most of its 5,000-year existence, China has been the largest, most populous, wealthiest, and mightiest nation on Earth. And for us as Westerners, it is essential to understand where China has been in order to anticipate its future. These 36 eye-opening lectures deliver a comprehensive political and historical overview of one of the most fascinating and complex countries in world history. You'll learn about the powerful dynasties that ruled China for centuries; the philosophical and religious foundations-particularly Confucianism, Daoism, and Buddhism-that have influenced every iteration of Chinese thought, and the larger-than-life personalities, from both inside and outside its borders, of those who have shaped China's history. As you listen to these lectures, you'll see how China's politics, economics, and art reflect the forces of its past. From the "Mandate of Heaven," a theory of social contract in place by 1500 B.C.E., 3,000 years before Western philosophers such as Thomas Hobbes and John Locke, to the development of agriculture and writing independent of outside influence to the technologically - advanced Han Dynasty during the time of the Roman Empire, this course takes you on a journey across ground that has been largely unexplored in the history courses most of us in the West have taken. In guiding you through the five millennia of China's history, Professor Hammond tells a fascinating story with an immense scope, a welcome reminder that China is no stranger to that stage and, indeed, has more often than not been the most extraordinary player on it.