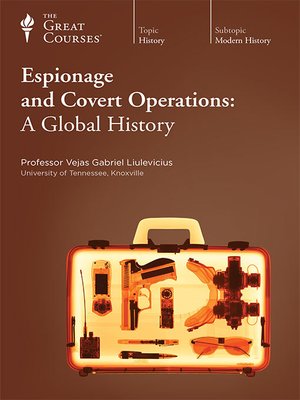 Step into the real world of the spy with this detailed and unforgettable tour of the millennia-long history and enduring legacy of espionage and covert operations. While most of us associate this top-secret subject with popular fiction and film, its true story is more fascinating, surprising, and important than you could possibly imagine. These 24 thrilling lectures survey how world powers have attempted to work in the shadows to gain secret information or subvert enemies behind the scenes. Filled with stories and insights that will change the way you think about world history's most defining events, this course lets you peer inside a subject whose truths most people are unaware of. Professor Liulevicius introduces you to the inner workings of covert organizations, including the Oprichnina, a feared secret service established by tsar Ivan the Terrible in the 1500s in an effort to cleanse Russia of treasonous activities; the CIA, established in 1947 by President Truman to replace the Office of Secret Services to be in charge of all intelligence collection – and which had an embarrassing early history; and Mossad, Israel's version of the CIA, which won a series of key intelligence victories during the cold war and over terror attacks and hostage crises in the second half of the 20th century. You'll also meet famous – and infamous – spies, including Sir Francis Walsingham, Mata Hari, and Kim Philby. In this stirring series of lectures, you'll study the psychological motives behind spies, the ethics of cyber warfare and corporate espionage, the question of whether we now live in a surveillance society, and more.

More about Vejas Gabriel Liulevicius
Espionage and Covert Operations
Copy and paste the code into your website.
New here? Learn how to read digital books for free