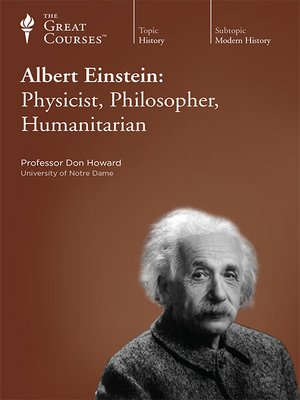 These 24 lectures present a wide-ranging intellectual exploration of this iconic scientist, genius, and champion of social justice. More than just a biography of Einstein's life, Albert Einstein provides you with an inside look at how this brilliant thinker arrived at his various revolutionary breakthroughs. According to Professor Howard, retracing the thought processes that led to Einstein's ideas is the key to understanding them. Guided by him, you'll reason your way to historic insights such as these: Light has both wave- and particle-like properties; absolute space and absolute time are meaningless concepts; and gravity is caused by the curvature of space-time. Each of these ideas sparked a scientific revolution. The first led to quantum physics; the second and third are conclusions from the special and general theories of relativity, which this lecture series explains in nontechnical detail. In addition to the groundbreaking scientific concepts, you'll learn how Einstein's dynamic life reflected a range of interests and passions that extended into fields like religion, international relations, and social justice. Indeed, as you'll discover, Einstein frequently engaged with many of the leading social and political issues of his day. These lectures are the perfect introduction to Einstein, putting his scientific discoveries into the context of his personal life, his philosophical views, and his outlook on the world. By the final lecture, you'll have become better acquainted with the whole Einstein: his ideas, his thought processes, and his impact on both his own time and ours.

Dr. Don Howard is Professor of Philosophy at the University of Notre Dame and Director of Notre Dame's Graduate Program in History and Philosophy of Science. A graduate of Michigan State University's Honors College and its Lyman Briggs College wit...

More about Don Howard
Albert Einstein
Copy and paste the code into your website.
New here? Learn how to read digital books for free