A History of Russia

audiobook (Unabridged) ∣ From Peter the Great to Gorbachev 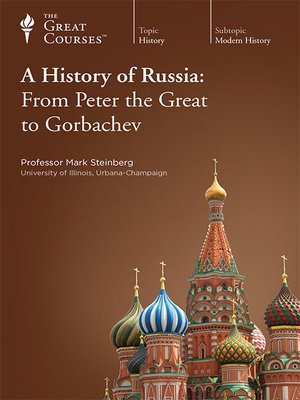 It's difficult to imagine a nation with a history more compelling for Americans than Russia. Before the collapse of the Soviet Union, this was the nation against which we measured our own nation's values and power and with whom war, if it ever came, could spell unimaginable catastrophe for our planet. Yet many Americans have never had the opportunity to study Russia in depth, and to see how the forces of history came together to shape a future so different from the dreams of most ordinary Russian people, eager to see their nation embrace Western values of progress, human rights, and justice. Now a much-honored teacher has created a series of 36 lectures designed to give you one of the deepest glimpses into Russia you've ever had - a vivid journey through 300 years of Russian history as seen through the eyes of her own people. You'll discover historical themes made clear not by discussing treaties, war declarations, or economic statistics - but by examining the lives and ideas of the men and women who were Russia: tsars, emperors, Communist Party leaders, writers, artists, peasants, and factory workers. You'll grasp what Russian life was like as Professor Steinberg analyzes ideas of power not only from the viewpoint of its rulers, but also from that of the ruled; the theme of happiness and its pursuit that resonates throughout Russian history, and ideas of morality and ethics as wielded by both the Russian state and its critics. And you'll listen as he brings alive the vibrant Russian imagination - so willing to visualize a different kind of life for its people, yet so burdened by its darker sides of doubt and pessimism that those visions were rejected.