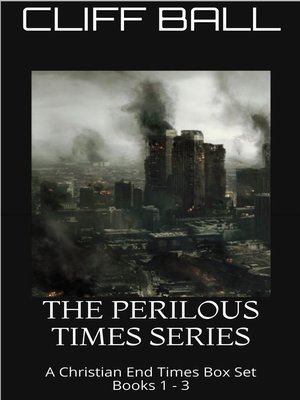 FictionLiteratureScience Fiction
This is a box set of the three novels in the Perilous Times Series.The Falling Away - Doctor Neal Kirkland becomes a Christian after one of his patients lead him to the Lord. Meanwhile, a virus spreads across the globe, with the powers-that-be blaming Christians for all of it. Does Doctor Kirkland put a stop to it?The Great Deception - The novel is about the first three and a half years of the Tribulation. The new leader of the world reorganizes the world into ten provinces and fixes the failing economy. Meanwhile, the seven trumpet judgments occur, the two witnesses appear in Jerusalem, and nothing will ever be the same again.The Great Tribulation - The novel goes through the last three and a half years of the seven-year Tribulation Period. The world leader "returns" from the dead and becomes "The Beast." The seven bowls of wrath occur and the world goes speeding towards Armageddon.
FictionLiteratureScience Fiction

Cliff Ball is a Christian, live in Texas, has 2 BA's, and a Technical Writing Certificate. He won 3rd in a youth magazine for a short story he wrote through Creative Writing class in high school back in 1992, called "Role Reversal." Standalone nov...

More about Cliff Ball
The Perilous Times Box Set
Copy and paste the code into your website.
New here? Learn how to read digital books for free