ebook ∣ From World War II to the Iraq and Afghanistan Wars

By William A. Taylor 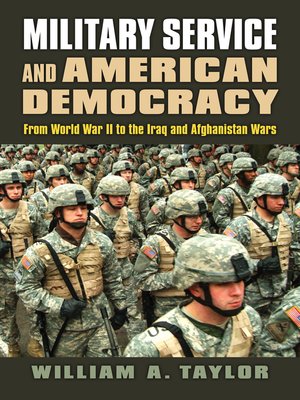 View more libraries...
"When I became secretary of defense," Ashton B. Carter said when announcing that the Pentagon would open all combat jobs to women, "I made a commitment to building America's force of the future. In the twenty-first century, that requires drawing strength from the broadest possible pool of talent."
That "pool of talent"—and how our nation's civilian and military leaders have tried to fill it—is what Military Service and American Democracy is all about. William Taylor chronicles and analyzes the long and ever-changing history of that often contentious and controversial effort, from the initiation of America's first peacetime draft just before our entry into World War II up to present-day conflicts in Iraq and Afghanistan. A history that runs from the selective service era of 1940–1973 through the era of the All-Volunteer Force of 1973 to the present, his book details the many personnel policies that have shaped, controlled, and defined American military service over the last eight decades. Exploring the individual and group identities excluded from official personnel policy over time—African Americans, women, and gays among others—Taylor shows how military service has been an arena of contested citizenship, one in which American values have been tested, questioned, and ultimately redefined. Yet, we see how this process has resulted in greater inclusiveness and expanded opportunities in military service while encouraging and shaping similar changes in broader society.
In the distinction between compulsory and voluntary military service, Taylor also examines the dichotomy between national security and individual liberty—two competing ideals that have existed in constant tension throughout the history of American democracy.