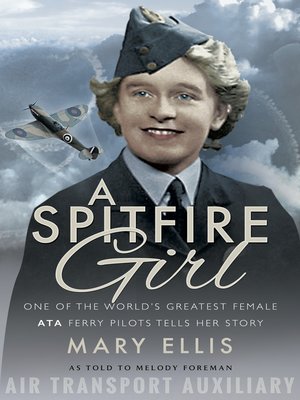 HistoryMilitaryNonfiction
We visualize dashing and daring young men as the epitome of the pilots of the Second World War, yet amongst that elite corps was one person who flew no less than 400 Spitfires and seventy-six different types of aircraft – and that person was Mary Wilkins. Her story is one of the most remarkable and endearing of the war, as this young woman, serving as a ferry pilot with the Air Transport Auxiliary, transported aircraft for the RAF, including fast fighter planes and huge four-engine bombers. On one occasion Mary delivered a Wellington bomber to an airfield, and as she climbed out of the aircraft the RAF ground crew ran over to her and demanded to know where the pilot was! Mary said simply: 'I am the pilot!' Unconvinced the men searched the aircraft before they realized a young woman had indeed flown the bomber all by herself. After the war she accepted a secondment to the RAF, being chosen as one of the first pilots, and one of only three women, to take the controls of the new Meteor fast jet. By 1950 the farmer's daughter from Oxfordshire with a natural instinct to fly became Europe's first female air commandant. In this authorized biography the woman who says she kept in the background during her ATA years and left all the glamour of publicity to her colleagues, finally reveals all about her action-packed career which spans almost a century of aviation, and her love for the skies which, even in her nineties, never falters. She says: 'I am passionate for anything fast and furious. I always have been since the age of three and I always knew I would fly. The day I stepped into a Spitfire was a complete joy and it was the most natural thing in the world for me.'
HistoryMilitaryNonfiction

A Spitfire Girl
Copy and paste the code into your website.
New here? Learn how to read digital books for free