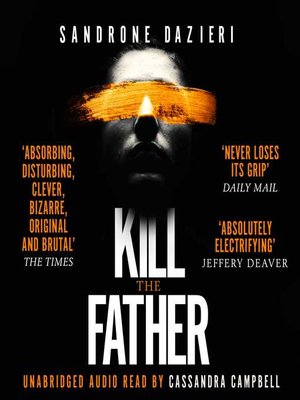 View more libraries...
'The rock cast a sharp, dark shadow over a shape huddled on the ground. Please don't let it be the boy, Colomba thought. Her silent prayer didn't go unanswered. The corpse belonged to the mother.'
When a woman is beheaded in a park outside Rome and her six-year-old son goes missing, the police unit assigned to the case sees an easy solution: they arrest the woman's husband and await his confession. But the Chief of Rome's Major Crimes unit doubts things are so simple. Secretly, he lures to the case two of Italy's top analytical minds: Deputy Captain Colomba Caselli, a fierce, warrior-like detective still reeling from having survived a bloody catastrophe, and Dante Torre, a man who spent his childhood trapped inside a concrete silo. Fed through the gloved hand of a masked kidnapper who called himself 'The Father', Dante emerged from his ordeal with crippling claustrophobia but, also, with an unquenchable thirst for knowledge and hyper-observant capacities.
All evidence suggests that 'The Father' is back and active after being dormant for decades. But when Columba and Dante begin following the ever-more-bizarre trail of clues, they grasp that what's really going on is darker than they ever imagined.
Kill the Angel, the sequel to Kill the Father, publishes in May 2018.
This unabridged audio version is read by Cassandra Campbell.