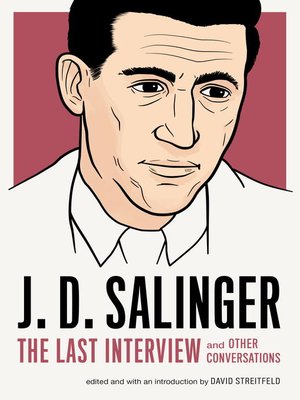 Biography & AutobiographyLiterary CriticismNonfiction
From the moment J. D. Salinger published The Catcher in the Rye in 1951, he was stalked by besotted fans, would-be biographers, and pushy journalists. In this collection of rare and revealing encounters with the elusive literary giant, Salinger discusses—sometimes willingly, sometimes grudgingly—what that onslaught was like, the autobiographical origins of his art, and his advice to writers. Including his final, surprising interview, and with an insightful introduction by New York Times journalist David Streitfeld, these enlightening, provocative, and even amusing conversations reveal a writer fiercely resistant to the spotlight but powerless to escape its glare.
From the Trade Paperback edition.
Biography & AutobiographyLiterary CriticismNonfiction

J.D. Salinger (b. 1919, New York, NY; d. 2010, Cornish, NH) was one of the most influential writers of the twentieth century. His landmark novel The Catcher in the Rye is widely established as a defining novel of post-World War II America. He is a...

More about J. D. Salinger
J. D. Salinger
Copy and paste the code into your website.
New here? Learn how to read digital books for free