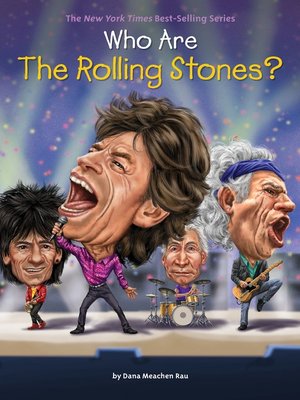 Who Are the Rolling Stones?

Biography & AutobiographyJuvenile NonfictionMusic
Follow the bad boys of rock and roll from their beginnings in London to their unparalleled success around the world.
Starting out over fifty years ago, the Rolling Stones took the music of the blues and blended it into rock and roll to create their own unique sound. Decades later, they are still hard at work, recording and playing live to massive crowds of adoring fans. Who Are the Rolling Stones? captures the excitement of the Stones on their journey to become the greatest rock-and-roll band in the world.
Biography & AutobiographyJuvenile NonfictionMusic

Dana Meachen Rau has written more than 300 books for children, including picture books, early readers, nonfiction, and biographies.Andrew Thomson is an illustrator based in Southern England who spends his time covered in ink and surrounded by scra...

More about Dana Meachen Rau
Who Are the Rolling Stones?
Copy and paste the code into your website.
New here? Learn how to read digital books for free