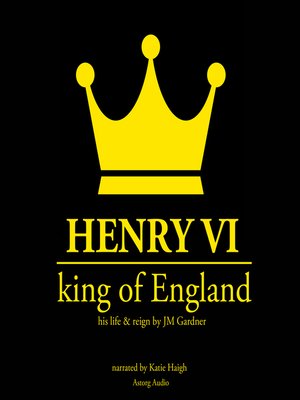 All Henry VI "The Mad" ever wanted was peace. But everything kept going to hell around him, till his mind broke from the pressure of having to rule two kingdoms, wage a war, and survive countless cabals all the while having not a single clue how rulership worked. Henry VI was thrown into power at the tender age of nine months, and kept being let down by everyone around him, while he struggled to understand what was going on. He was kind and gentle, unable to lie, and constantly threatened by the vicious plots around him. He suffered his last nervous breakdown when England lost its French possessions; this was the cue for his relatives to engage in a cruel fight for power, resulting in a civil war known as the War of the Roses. Discover the tragic story of Henry VI, the King who wanted out; understand how such an ill-suited ruler was able to reign for nearly forty years and command such loyalty, even after his cause was lost; witness his demise, when catatonia was revealed to him as the only escape from unbearable responsibilies.