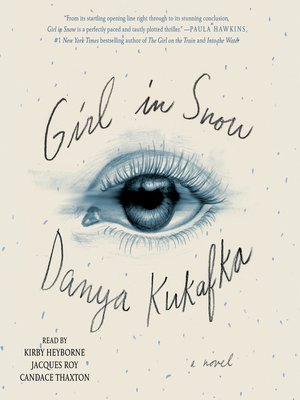 FictionLiteratureSuspenseThriller
"A perfectly paced and tautly plotted thriller...and an incredibly accomplished debut" (Paula Hawkins, #1 New York Times bestselling author of The Girl on the Train and Into the Water), about a beloved high schooler found murdered in her sleepy Colorado suburb and the secret lives of three people connected to her.
How can you love someone who's done something horribly, horribly wrong? When a beloved high schooler named Lucinda Hayes is found murdered, no one in her community is untouched—not the boy who loved her too much; not the girl who wanted her perfect life; not the officer assigned to investigate her murder. In the aftermath of the tragedy, these three indelible characters—Cameron, Jade, and Russ—must each confront their darkest secrets in an effort to find solace, the truth, or both.

In crystalline prose, Danya Kukafka offers a brilliant exploration of identity and of the razor-sharp line between love and obsession, between watching and seeing, between truth and memory. "A sensational debut—great characters, mysteries within mysteries, and page-turning pace. Highly recommended" (Lee Child, #1 New York Times bestselling author of the Jack Reacher novels). Hailed as "Gillian Flynn of 2017" (Yahoo! Style), compulsively readable and powerfully moving, Girl in Snow is "engagingly told... its endearing characters' struggles linger in memory after this affecting work is done" (The Wall Street Journal).
FictionLiteratureSuspenseThriller

Danya Kukafka is a graduate of New York University's Gallatin School of Individualized Study. Girl in Snow is her first novel.

Girl in Snow
Copy and paste the code into your website.
New here? Learn how to read digital books for free