ebook ∣ The Myth and Reality of Hitler's Secret Police 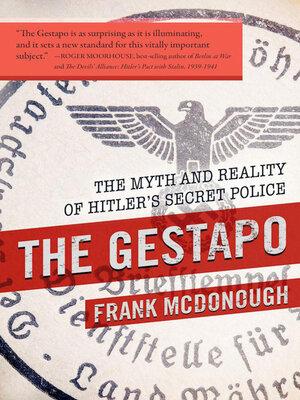 View more libraries...
A comprehensive exploration of the history of the official secret police of Nazi Germany.
Written with access to previously unpublished records, this is the fullest and most definitive account available on Hitler's secret police, the Gestapo. The book illustrates how, despite its material constraints, this group was able to extend its reach widely and quickly by manipulating and colluding with the general public during World War II, making ordinary German citizens complicit in the rendition of their associates, friends, colleagues, and neighbors. Though it was a powerful institution, it was not an all-powerful institution, and McDonough also relates the fascinating and underreported accounts of a cross-section of ordinary and extraordinary people who opposed the Nazi regime and its oppressive governance.
The Gestapo will provide a chilling new doorway into the everyday life of the Third Reich and give powerful testimony from the victims of Nazi terror, while also challenging popular myths about the Gestapo and its inner workings.
"Superbly scholarly and just as readable. A chilling, meticulous record of state brutality that is more compelling than any novel." —Dan Snow, award-winning TV historian and bestselling author
"In this thoroughly researched and elegantly written book, Frank McDonough confronts decades of myth-making to uncover the complex realities of Hitler's notorious secret police. The Gestapo is as surprising as it is illuminating, and it sets a new standard for this vitally important subject." —Roger Moorhouse, bestselling author of Berlin at War
"A new look at Hitler's secret state police as a smaller crack force than is widely known . . . a nuanced study of the Geheime Staatspolizei, or Gestapo . . . A well-researched book that clarifies many misconceptions." —Kirkus Reviews