ebook ∣ Brides for the Taking 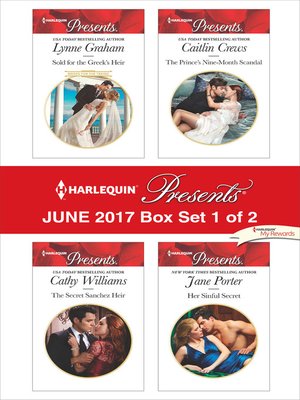 Brides for the Taking

View more libraries...
Harlequin® Presents brings you a collection of four new titles! This Presents box set includes:
SOLD FOR THE GREEK'S HEIRBrides for the Taking by Lynne GrahamJax Antonakos considers a ready-made heir to be worth bidding for—especially if it makes Lucy Dixon his! He's determined to remind Lucy of their insatiable chemistry in the wedding bed—and Lucy finds his claim a struggle to resist...
THE SECRET SANCHEZ HEIRby Cathy WilliamsWhen Leandro Sanchez uncovers the consequences of his one night with innocent Abigail, she finds herself completely at the billionaire's mercy. The Spanish tycoon always gets what he wants, and now he's determined to legitimize his heir...by seducing Abigail into wearing his ring!
THE PRINCE'S NINE-MONTH SCANDAL Scandalous Royal Bridesby Caitlin CrewsWhen personal assistant Natalie Monette discovers her secret identical twin, Princess Valentina, they decide to swap lives. Suddenly, her "fiancé" Crown Prince Rodolfo finds himself feeling a desire he cannot understand...until he discovers who's carrying the consequence of their passion!
HER SINFUL SECRETThe Disgraced Copelandsby Jane PorterLogan finds herself at Rowan Argyros's mercy when he discovers their secret daughter, but she cannot forget how he took her virginity and heartlessly rejected her. Rowan longs to claim her—but will her craving for his touch persuade her into marriage?
Be sure to collect Harlequin® Presents' June 2017 Box Set 2 of 2!

Brides for the Taking