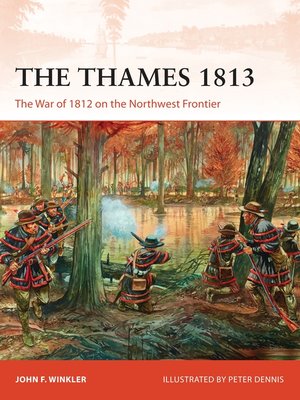 The War of 1812 on the Northwest Frontier · Campaign

The battle of the Thames was the culmination of a bloody campaign that saw American forces clash with the British and their Native American allies on multiple occasions. In a battle that included the future US president William Henry Harrison, American naval hero Oliver Hazard Perry and the legendary Shawnee leader Tecumseh the Americans prevailed, due in part to their imaginative use of Kentucky mounted riflemen to charge British regular infantry and artillery. Their victory allowed them to secure the North-West frontier, a crucial strategic gain in the War of 1812.
Drawing on his expertise of US–Native American conflicts, historian John F. Winkler investigates the battle of the Thames, bringing the conflict to life through detailed analysis, combat reports and stunning specially commissioned illustrations.

John F. Winkler lives in Columbus, Ohio, with his wife of more than 40 years. They have three children and six grandchildren. He has written many works on the history of Roman, English, and American law. He also explores forgotten historical sites...

More about John F. Winkler
The Thames 1813
Copy and paste the code into your website.
New here? Learn how to read digital books for free