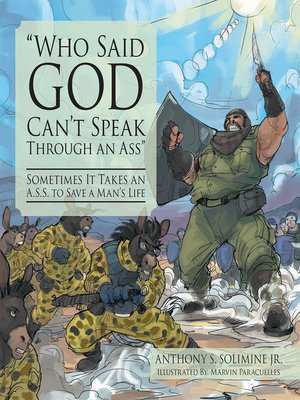 Who Said God Cant Speak Through an Ass

Sometimes It Takes an A.S.S. to Save a Mans Life

Biography & AutobiographyNonfiction
After forty-three years of sharing the experiences I've had since I asked God to forgive me and then invited the Spirit of Christ to come into my life and change it one night while making me a new creature through Christ (2 Corinthians 5:17), I've come to a disturbing conclusion that I felt needed to be addressed. This conclusion is one that caused me to consider how it is most Christians never have supernatural spiritual experiences like I have although they claim to be the redeemed servants of a totally supernatural invisible being who lives and operates in the supernatural dimension continuously through the Word of God and the Holy Spirit dwelling in the body of believers on the earth. He invites us into that supernatural dimension known as the kingdom of God through his Son Jesus Christ. They along with countless other Christians in America sit and read their Bibles weekly learning about the incredible experiences of other men and women of God, whom they see as spiritual giants, ones that the Lord spoke to occasionally, like Jonah, some more, some considerably less, causing them to write about those experiences in a very matter of fact way, strictly for the benefit of those in the future, who will want to know the God they claim to have met and communicated with. They hear about those things continuously while having their Bible studies, yet they never have one of those incredible experiences themselves, which tells me something is missing in that spiritual relationship. To address that deficiency, I've chosen to share my own supernatural experiences based on the scriptures that took place over the course of four decades, which some spiritually shallow believers have actually claimed is just eccentric behavior on my part, which, if true, would put the entire gospel message and its promised experiences in serious jeopardy of being seen by myself and others as false for the similarities and incredible claims it contains.
Biography & AutobiographyNonfiction

Who Said God Cant Speak Through an Ass
Copy and paste the code into your website.
New here? Learn how to read digital books for free