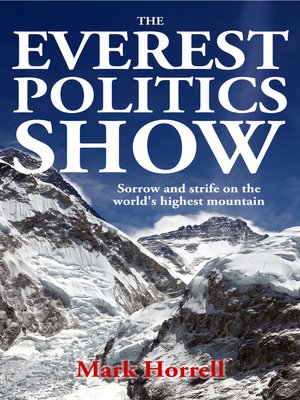 Sports & RecreationsTravelNonfiction
In April 2014 Mark Horrell went on a mountaineering expedition to Nepal, hoping to climb Lhotse, the fourth-highest mountain in the world, which shares a base camp and climbing route with Mount Everest.He dreamed of following in the footsteps of Tenzing Norgay and Edmund Hillary, by climbing through the infamous ice maze of the Khumbu Icefall, and he yearned to sleep in the grand amphitheatre of Everest Base Camp, surrounded by towering peaks.He was also intrigued by the media publicity surrounding commercial expeditions to Everest. He wanted to discover for himself whether it had become the circus that everybody described.But when a devastating avalanche swept across the Khumbu Icefall, he got more than he bargained for. Suddenly he found himself witnessing the greatest natural disaster Everest had ever seen.And that was just the start. Everest Sherpas came out in protest, issuing a list of demands to the Government of Nepal. What happened next left his team confused, bewildered and fearing for their safety.
Sports & RecreationsTravelNonfiction

For five years I have been writing what has been described as one of the most credible Everest opinion blogs out there. I write about trekking and mountaineering from the often silent perspective of the commercial client. For over a decade I have ...

More about Mark Horrell
The Everest Politics Show
Copy and paste the code into your website.
New here? Learn how to read digital books for free