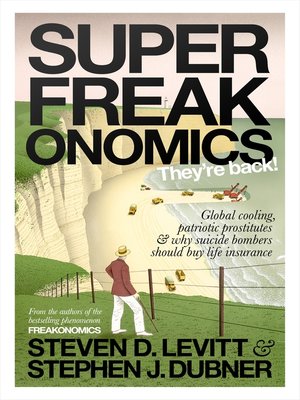 Steven Levitt, the original rogue economist, and Stephen Dubner have spent four years uncovering the hidden side of even more controversial subjects, from terrorism to shark attacks, cable TV to hurricanes. The result is Superfreakonomics. It reveals, among other things: - Why you are more likely to be killed walking drunk than driving drunk - How a prostitute is more likely to sleep with a policeman than be arrested by one - Why terrorists might be easier to track down than you would imagine - How a sex change could boost your salary Because sometimes the most superfreaky solution is the simplest.

Stephen J. Dubner is an award-winning author, journalist, and radio and TV personality. He quit his first career - as an almost-rock-star - to become a writer. He has worked for The New York Times and published three non-Freakonomics books. He liv...

Steven D. Levitt, a professor of economics at the University of Chicago, was awarded the John Bates Clark medal, given to the most influential American economist under the age of forty. He is also a founder of The Greatest Good, which applies Frea...

More about Steven D. Levitt
Superfreakonomics
Copy and paste the code into your website.
New here? Learn how to read digital books for free