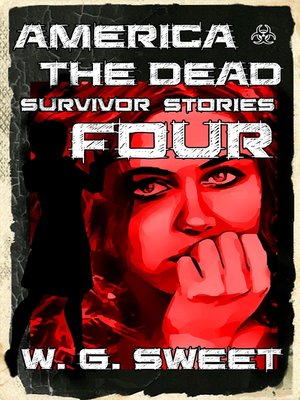 America The Dead, no. 4 · America the Dead

Gabe Kohlson moved away from the monitors. "Heart rate is dropping, don't you think..." He stopped as the monitor began to chime softly. Before he could get fully turned around the chiming turned into a strident alarm that rose and fell. "Dammit," Kohlson said as he finished his turn.
"What is it," David Johns wheeled his chair across the short space of the control room. His outstretched hands caught him at the counter top and slowed him at Kohlson's monitor.
"Flat lined," Kohlson said as he pushed a button on the wall to confirm what the doctors one level up already knew. Clayton Hunter was dead.
"I see it," Doctor Ed Adams replied over the ceiling speakers. The staff called him Doctor Christmas for his long white beard and oversize belly. "Berty and I are on the way."
"Lot of good that will do," Johns muttered.
Kohlson turned to him. "Go on in... Do CPR if you want... They don't pay me enough to do it. I don't know what that shit is. Look at the way the Doc suits up. Clayton Hunter will be in rigor before anyone gets in there at all."
"No argument," Johns said. He wheeled back to his own monitor, called up an incident sheet and began to type.
"Me too," Kohlson agreed. "Preserve the video, med and monitor data." He punched a few buttons on his console and an interface for the medical equipment came up. He saved the last 48 hours of data, and then began to fill out his own incident report. These reports might never be seen by more than one person, maybe two if you counted the person that wrote it, Kohlson thought, but it would always be there. Classified: Top secret for the next hundred years or so, and he wondered about that too. Would it even be released after a long period? He doubted it. The shit they were doing here was bad. Shit you didn't ever want the American public to know about. He had made his delivery a few weeks before. Whatever this shit was, bad people had not only come to know about it, but had come to have a need for what it did. It didn't matter to him, not really. There were rumors, a few things he had seen while monitoring test subjects. Nothing he considered concrete. Maybe it extended life, that was the strongest rumor. From what he had seen though, as far as test subjects, it did its fair share of ending life pretty effectively too. And here was another one to add to the growing number of failures... If that's what they were.
This incident report, along with the one Johns was doing, would probably get buried deep under some program listing that no one would ever suspect to look into. Or maybe it would get burned right along with Clayton Hunter's body. He glanced up at the clock and then went back to typing.
"Uh... Call it 4:32 PM?" He asked.
"Works for me," Johns agreed. "I got 94 for the body," Johns said.
"Yeah... Yeah, me too. That's a fast drop, but we both got the same thing. 94 it is... No heart, no respiratory, dead as dog shit."
"Dog shit," Johns agreed. They both fell silent as they typed. A few moments later the doors to the observation room chimed, the air purifiers kicked on with a high pitched whine, and they could both feel the air as it dragged past them and into the air ducts. The entire volume would be replaced and the room depressurized and then re-pressurized before the doors would open. And that would only happen after the air was tested and retested. A good twenty minutes away before anyone would step foot into the room with Clayton Hunter.

America the Dead Survivor Stories Four
Copy and paste the code into your website.
New here? Learn how to read digital books for free