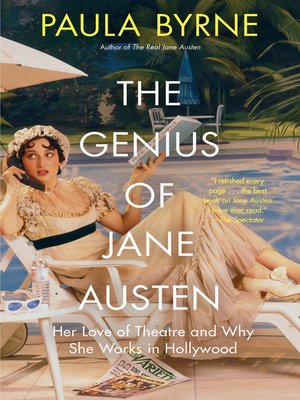 The Genius of Jane Austen

Her Love of Theatre and Why She Works in Hollywood

Perfect for fans of Jane Austen, this updated edition of Paula Byrne's debut book includes new material that explores the history of Austen stage adaptations, why her books work so well on screen, and what that reveals about one of the world's most beloved authors.

Originally published by Bloomsbury Academic in 2003 as Jane Austen and the Theatre, Paula Byrne's first book was never made widely available in the US and is out of print today. An exploration of Austen's passion for the stage—she acted in amateur productions, frequently attended the theatre, and even scripted several early works in play form—it took a nuanced look at how powerfully her stories were influenced by theatrical comedy.
This updated edition features an introduction and a brand new chapter that delves into the long and lucrative history of Austen adaptations. The film world's love affair with Austen spans decades, from A.A. Milne's "Elizabeth Bennet," performed over the radio in 1944 to raise morale, to this year's Love and Friendship. Austen's work has proven so abidingly popular that these movies are more easily identifiable by lead actor than by title: the Emma Thompson Sense and Sensibility, the Carey Mulligan Northanger Abbey, the Laurence Olivier Pride and Prejudice. Byrne even takes a captivating detour into a multitude of successful spin-offs, including the phenomenally brilliant Clueless. And along the way, she overturns the notion of Jane Austen as a genteel, prim country mouse, demonstrating that Jane's enduring popularity in film, TV, and theater points to a woman of wild comedy and outrageous behavior.

For lovers of everything Jane Austen, as well as for a new generation discovering her for the first time, The Comic Muse demonstrates why this beloved author still resonates with readers and movie audiences today.

Paula Byrne is the critically acclaimed author of five biographies, including Belle: The Slave Daughter and the Lord Chief Justice, The Real Jane Austen, and Mad World: Evelyn Waugh and the Secrets of Brideshead. She lives in Oxford, England, with...

More about Paula Byrne
The Genius of Jane Austen
Copy and paste the code into your website.
New here? Learn how to read digital books for free