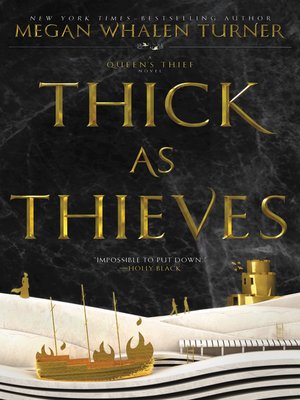 Thick as Thieves is the fifth novel set in the world of the Queen's Thief. New York Times-bestselling author Megan Whalen Turner's entrancing and award-winning Queen's Thief novels bring to life the world of the epics and feature one of the most charismatic and incorrigible characters of fiction, Eugenides the thief. Megan Whalen Turner's Queen's Thief novels are rich with political machinations and intrigue, battles lost and won, dangerous journeys, divine intervention, power, passion, revenge, and deception. Perfect for fans of Leigh Bardugo, Marie Lu, Patrick Rothfuss, and George R. R. Martin.

Kamet, a secretary and slave to his Mede master, has the ambition and the means to become one of the most powerful people in the Empire. But with a whispered warning the future he envisioned is wrenched away, and he is forced onto a very different path. Set in the world of the Queen's Thief, this epic adventure sees an ordinary hero take on an extraordinary mission. The Queen's Thief novels have been praised by writers, critics, reviewers, and fans, and have been honored with glowing reviews, "best of" citations, and numerous awards, including the Los Angeles Times Book Prize, a Newbery Honor, the Andre Norton Award shortlist, and the Mythopoeic Fantasy Award. Thick as Thieves includes two maps, a map of the world of the Queen's Thief, and a map of Kamet's journey.

"The Queen's Thief books awe and inspire me. They have the feel of a secret, discovered history of real but forgotten lands. The plot-craft is peerless, the revelations stunning, and the characters flawed, cunning, heartbreaking, exceptional. Megan Whalen Turner's books have a permanent spot on my favorites shelf, with space waiting for more books to come."—Laini Taylor, New York Times-bestselling author of the Daughter of Smoke and Bone novels and Strange the Dreamer

"Unforgettable characters, plot twists that will make your head spin, a world rendered in elegant detail—you will fall in love with every page of these stories. Megan Whalen Turner writes vivid, immersive, heartbreaking fantasy that will leave you desperate to return to Attolia again and again."—Leigh Bardugo, #1 New York Times-bestselling author of Six of Crows and Crooked Kingdom

"Megan Whalen Turner has constructed a clever world filled with suspense and intrigue and characters that will never be forgotten. Once you dive into the world of the Queen's Thief, prepare to have your life stolen from you until you finish them all." —Joelle Charbonneau, New York Times-bestselling author of the Testing trilogy