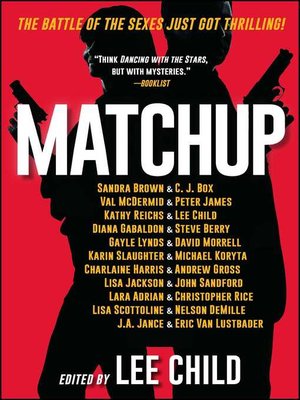 FictionShort StoriesSuspenseThriller
This "highly recommended" (Publishers Weekly, starred review) collection edited by New York Times bestselling author Lee Child pairs the beloved characters of twenty-two internationally bestselling writers in "a must-read for fans of the thriller genre. Very rarely does this kind of star power assemble for one anthology, and each story delivers the goods" (TheRealBookSpy.com).
The incredible follow-up to FaceOff features twenty-two of the world's bestselling and critically acclaimed thriller writers pairing their series characters in an eleven-story anthology curated by the International Thriller Writers (ITW). MatchUp takes the never-before-seen bestseller pairings of FaceOff and adds a delicious new twist: gender. "Think Dancing With the Stars, but with mysteries" (Booklist) as eleven of the world's best female thriller writers from Diana Gabaldon to Kathy Reichs to Charlaine Harris are paired with eleven of the world's best male thriller writers, including John Sandford, C.J. Box, and Nelson DeMille, among others. "This box holds a chocolate or two that will be to everyone's liking" (Kirkus Reviews).

In these innovative stories, their beloved protagonists, Lee Coburn, Joe Pickett, and Jack Reacher—just to name a few—team up to unnerve and satisfy thriller fans worldwide. All of the contributors are ITW members, and the project is edited by ITW member and #1 New York Times bestselling author Lee Child. The lineup includes:

Peter James is the #1 international bestselling author of the Roy Grace series, with more than eighteen million copies sold all over the world. His novels have been translated into thirty-seven languages and many are in development for TV and film...

Val McDermid is the author of many crime novels and has created the notable characters Lindsay Gordon, Karen Pirie, Kate Brannigan and Tony Hill. Her novels have been translated into forty languages and have sold over 16 million copies. Visit her ...

Sandra Brown is the author of seventy-one New York Times bestsellers. Brown began her writing career in 1981 and since then has published over seventy novels, most of which remain in print. Sandra and her husband, Michael Brown, live in Arlington,...

C.J. Box is the New York Times bestselling author of fifteen novels including the award-winning Joe Pickett series. Box has won the Edgar Award for Best Novel as well as the Anthony, Macavity, Barry, and Le Calibre .38 awards. His novels have been...

MatchUp
Copy and paste the code into your website.
New here? Learn how to read digital books for free