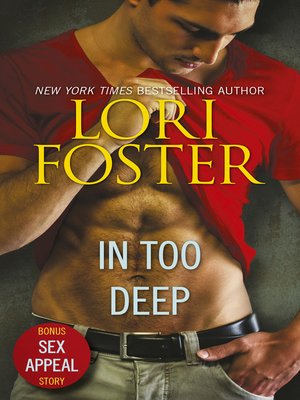 In Too Deep--2 Book Box Set

PI Harry Lonnigan wasn't fooled by her disguise. The waif dressed as a boy, who was about to blow his cover and get herself killed, was every inch a woman. So he saved her neck and the sexy little body that went with it. And lived to regret being such a hero.

Harry discovered Charlie was the estranged daughter of his best friend and father figure. His first priority should have been getting them back together, but Charlie didn't know that. Her first priority was to seduce Harry, and before Harry knew it, he was in too deep.

Shadow Callahan was simply trying to corral ten to-die-for men when she propositioned Brent Bramwell. All the specialty shops in the mall agreed that hosting a 'sexiest man' contest would bring in female shoppers. Of course, she couldn't blame Brent for getting the wrong idea, since her shop, Sex Appeal, featured interesting...toys and such.

Brent had always been an in-control kind of guy, with no time for playing games. But after meeting Shadow, he realised he was missing out on things. Fun things. Things he only wanted to do with her...

In Too Deep--2 Book Box Set
Copy and paste the code into your website.
New here? Learn how to read digital books for free