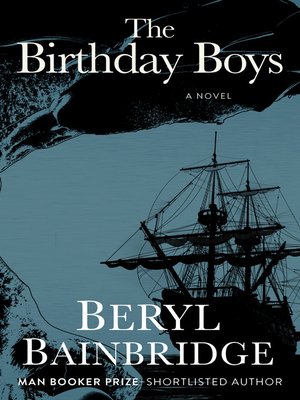 View more libraries...
The dramatic, fictionalized account of Robert Falcon Scott's famed and fatal expedition to Antarctica by one of Britain's best-loved authors.
Departing from Cardiff in 1910, the Terra Nova entered dark waters and headed south. On board were Petty Officer Edgar "Taff" Evans, Dr. Edward "Uncle Bill" Wilson, Capt. Robert Falcon "Con" Scott, Lt. Henry Robertson "Birdie" Bowers, and Capt. Lawrence Edward "Titus" Oates. Through an imaginative yet historically accurate retelling of the crew's mission to become the first explorers to reach the South Pole—and with each of the book's five chapters narrated from the unique perspective of one of these men—author Beryl Bainbridge imbues a tragic and thrilling adventure story with profound psychological, metaphysical, and emotional insight.

The first three chapters of The Birthday Boys—recounted by Evans, Wilson, and Scott, respectively—tell of the preparations and fundraising required for the journey, two stopovers in Madeira and South Trinidad Island, and the difficult conditions the expedition faces when they land on Antarctica. It is Wilson who first fears for the safety of the crew, when from atop the ship's crow's-nest he spies a fantastical half-man-half-bird creature flying above the sea. The doctor is certain this apparition is a harbinger of death. Troubles then ensue when Scott sets up a base camp at Cape Evans as well as several depots in the direction of the South Pole. The motor sledge breaks down almost immediately, several ponies are lost to the harsh elements, and it is revealed that a competing polar expedition led by Norwegian explorer Roald Amundsen is already well ahead of Scott's team.

In the final two chapters—told by Bowers and Oates—readers are taken on a dangerous but spectacular detour to a penguin rookery, where the men witness gorgeous auroras, build an igloo, gather eggs, and slaughter the arctic birds for their blubber. When a violent blizzard hits, it looks as if no one will make it out alive. But brotherly love in the face of all odds gives the men the power to survive, and the five heroes set off on their final march to the South Pole.

Though history has already revealed the catastrophic end of this tale, Bainbridge shows us the bravery, courage, and humanity essential to the adventure. Masterfully blurring the boundaries between fact and fiction, The Birthday Boys is a compelling historical biography that challenges readers to discover truths that can only be reached through the imagination.

This ebook features an illustrated biography of Beryl Bainbridge including rare images from the author's estate.