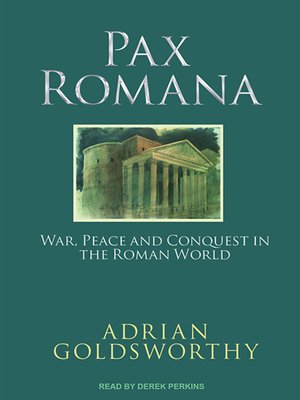 War, Peace, and Conquest in the Roman World

HistoryNonfiction
Bestselling author Adrian Goldsworthy turns his attention to the Pax Romana, the famous peace and prosperity brought by the Roman Empire at its height in the first and second centuries AD. Yet the Romans were conquerors, imperialists who took by force a vast empire stretching from the Euphrates to the Atlantic coast. Ruthless, Romans won peace not through coexistence but through dominance; millions died and were enslaved during the creation of their empire. Pax Romana examines how the Romans came to control so much of the world and asks whether traditionally favorable images of the Roman peace are true. Goldsworthy vividly recounts the rebellions of the conquered, examines why they broke out, why most failed, and how they became exceeding rare. He reveals that hostility was just one reaction to the arrival of Rome and that from the outset, conquered peoples collaborated, formed alliances, and joined invaders, causing resistance movements to fade away.
HistoryNonfiction

Adrian Goldsworthy is an award-winning historian of the classical world. He is the author of numerous books about ancient Rome, including Caesar, How Rome Fell, Pax Romana, and Augustus. Goldsworthy lives in South Wales.

More about Adrian Goldsworthy
Pax Romana
Copy and paste the code into your website.
New here? Learn how to read digital books for free