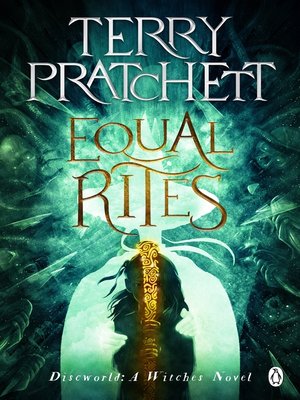 The Discworld is very much like our own – if our own were to consist of a flat planet balanced on the back of four elephants which stand on the back of a giant turtle, that is . . .

They say that a little knowledge is a dangerous thing, but it's not half so bad as a lot of ignorance.

The last thing the wizard Drum Billet did, before Deathlaid a bony hand on his shoulder, was to pass on his staff of power to the eighth son of an eighth son.

Unfortunately for his colleagues in the chauvinistic (not to say misogynistic) world of magic, he failed to check that the baby in question was a son.

Everybody knows that there's no such thing as a female wizard. But now it's gone and happened, there's nothing much anyone can do about it.

The Discworld novels can be read in any order but Equal Rites is the first book in the Witches series.

Terry Pratchett was the acclaimed creator of the global bestselling Discworld series, the first of which, The Colour of Magic, was published in 1983. In all, he was the author of over fifty bestselling books. His novels have been widely adapted fo...

More about Terry Pratchett
Equal Rites
Copy and paste the code into your website.
New here? Learn how to read digital books for free