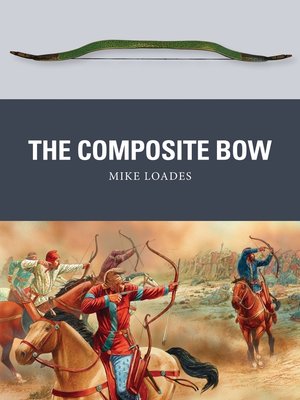 An ancient design, emerging from Central Asia in the second millennium BC, the composite bow was adopted by a staggering variety of cultures, from nomadic tribal peoples such as the Huns, Turks and Mongols, to mighty empires such as the Romans, Byzantines, Persians, Arabs and Chinese. Offering high power and portability, the composite bow was an ideal cavalry weapon, though it was also used by infantry in open battle and as a siege weapon. In this important study, an expert on Eastern military technology tells the story of this extraordinary piece of military hardware; how it was made and how various cultures developed differing tactics for using it. He explains why the composite bow achieved such stunning successes and how it endured as a weapon of choice for thousands of years.

Mike Loades is a respected author, broadcaster, director and action arranger who has made well over 100 television appearances as a historical weapons expert and military historian and been a presenter for such shows as Time Commanders (BBC), Weap...

More about Mike Loades
The Composite Bow
Copy and paste the code into your website.
New here? Learn how to read digital books for free