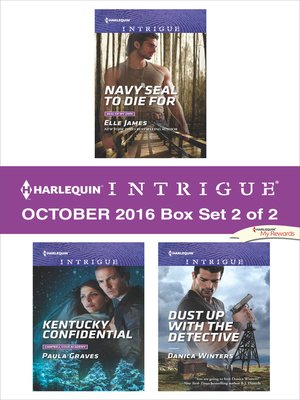 FictionRomanceSuspenseThriller
Harlequin Intrigue brings you three new titles at a great value, available now! Enjoy these suspenseful reads packed with edge-of-your-seat intrigue and fearless romance.NAVY SEAL TO DIE FORSEAL of My Own by Elle JamesAfter witnessing multiple attempts to kill sexy Stealth Operations Specialist Becca Smith, Navy SEAL Quentin Lovett offers to cover her six while she follows leads to find her father's killer. KENTUCKY CONFIDENTIALCampbell Cove Academy by Paula GravesWhen Captain Connor McGinnis discovers his dead wife is very much alive, pregnant, and in grave danger, he puts his life on the line to protect her and save their marriage. DUST UP WITH THE DETECTIVE by Danica WintersDeputy Blake West never dreamed she'd reunite with her childhood friend Jeremy Lawrence investigating the circumstances of his brother's death, and as they begin to uncover the truth, danger might be much closer than they suspect.Look for Harlequin Intrigue's October 2016 Box set 1 of 2, filled with even more edge-of-your seat romantic suspense!Look for 6 compelling new stories every month from Harlequin® Intrigue!
FictionRomanceSuspenseThriller

Born in the American South, Paula Graves draws from her experiences with the culture and geography of the region, especially the Appalachian Mountains, to add authentic flavor and unique characters to her tales of romance and mystery.www.paulagra...

Danica Winters is a bestselling author who has won multiple awards for writing books that grip readers with their ability to drive emotion through suspense and occasionally a touch of magic. When she's not working, she can be found in the wilds o...

Raised an Air Force brat, Elle James got her work ethic from her dad, creativity from mom and inspiration from her sister. As a member of the reserves, she's traveled, managed a career, and raised three children. She and her husband even raised os...

More about Elle James
Harlequin Intrigue October 2016, Box Set 2 of 2
Copy and paste the code into your website.
New here? Learn how to read digital books for free