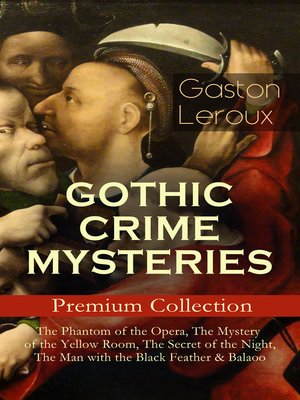 The Phantom of the Opera, The Mystery of the Yellow Room, The Secret of the Night, The Man with the Black Feather & Balaoo: Thriller Classics

FictionMysteryRomanceShort Stories
This carefully crafted ebook: "GOTHIC CRIME MYSTERIES – Premium Collection: The Phantom of the Opera, The Mystery of the Yellow Room, The Secret of the Night, The Man with the Black Feather & Balaoo" is formatted for your eReader with a functional and detailed table of contents. "The Mystery of the Yellow Room" is one of the first locked-room mystery crime fiction novels. It is the first novel starring fictional detective Joseph Rouletabille, and concerns a complex and seemingly impossible crime in which the criminal appears to disappear from a locked room. Leroux provides the reader with detailed, precise diagrams and floorplans illustrating the scene of the crime. The emphasis of the story is firmly on the intellectual challenge to the reader, who will almost certainly be hard pressed to unravel every detail of the situation. "The Phantom of the Opera" is a story inspired by historical events at the Paris Opera during the nineteenth century. Opera singer Christine triumphs at the gala on the night of the old managers' retirement. Her old childhood friend, Raoul, hears her sing and recalls his love for Christine. At this time, there are rumours of a phantom living at the Opera and he makes himself known to the managers through letters and malevolent acts. Sometime after the gala, the Paris Opera performs Faust, with the prima donna Carlotta playing the lead, against the Phantom's wishes. During the performance, Carlotta loses her voice and the grand chandelier plummets into the audience... Other novels included are: The Secret of the Night, The Man with the Black Feather and Balaoo. Gaston Leroux (1868-1927) was a French journalist and author of detective fiction. In the English-speaking world, he is best known for writing the novel The Phantom of the Opera (Le Fantôme de l'Opéra), which has been made into several film and stage productions of the same name.
FictionMysteryRomanceShort Stories

Gothic Crime Mysteries – Premium Collection
Copy and paste the code into your website.
New here? Learn how to read digital books for free